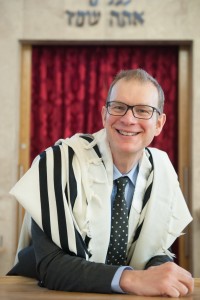 As Rabbi, Fabian espouses a joyful Jewish experience and synagogue atmosphere that enables spiritual growth, encourages learning and direct interaction with traditional sources. He is dedicated to inspiring the positive and confident Jewish identity which he himself embraces. Grounded in tradition, he is committed to Jewish pluralism within a welcoming, dynamic, and open community with active involvement in society at large.

Before coming to Manchester Rabbi Fabian served the Beth Hillel congregation in Rome. His rabbinic student pulpits included extended internships in Spain, Sweden, Switzerland and Germany. On the Continent, he has been active in Jewish education and Jewish social entrepreneurial projects, contributing valuably to the ongoing revitalisation of European Jewish life.

In his spare time he enjoys being outdoors, learning about historical recipes and traditional Jewish food preparation, Nordic design, and spending time with friends and family.

He is delighted to make Manchester his home and honoured to serve Menorah as the community’s new rabbi.

Our Rabbi is currently on Sabbatical and will return in May 2022. In the interim our services are led by lay leaders and visiting Rabbis.

Shabbat Morning Service – In Person and via Zoom or Live Stream

A Taste of Talmud – with Rav Reuven Silverman

Shabbat Morning Service – In Person and via Zoom or Live Stream